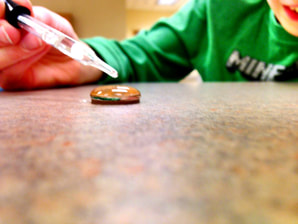 Drops of water on a penny will create a "bubble" effect before breaking and spilling over the sides due to the bonds between molecules at the surface of the water. (see image to left)
However, trying the same thing with soapy water will not have the same results. Soap breaks down bonds between many types of molecules, and water is not able to create surface tension when soap is added.
On your data sheet:
​a. In 2-3 sentences, compare the two trials.
b. What was different about the trials?
c. Explain what happened to the surface tension of water when the soap was added.
d. What force acted on the plain water to finally break the surface tension?
​

Part 1: Cohesion
A droplet of water placed on wax paper will slide easily around the surface without breaking apart. If it is broken, moving the smaller drops together will cause them to come back together forming a single drop. The drop is mostly spherical and stays together as it moves.
On your data sheet:
a. Record your observations of the water drop in detail. Describe the shape of the drop as it moves and tell if it moves as one large drop or if it naturally breaks into smaller pieces.
b. Explain how this demonstrates the cohesive property of water.
Part II. Adhesion
Drops of water placed on a laminated card will make it slightly more difficult to slide the cards against each other. You can press the two cards together and let go of one, but it will stay in place, "sticking" to the other card without you having to hold it.
On your data sheet:
a. Describe your observations in detail.
b. Explain how this demonstrates the adhesive property of water. 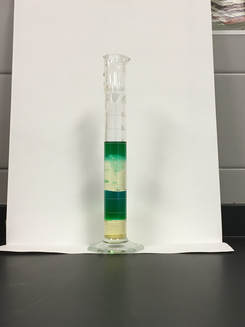